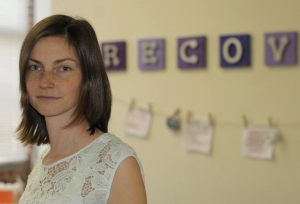 May is the great college swap month.

We send students who have been studying all year at Clark, Assumption, Holy Cross, WPI, etc. back to their families and we welcome home our sons and daughters who have been sitting up late writing term papers or prepping for exams at out-of-town, out-of-state, even out-of-the-country schools.

Whether they are coming or going, however, college kids may be bringing home with them something more surprising than a tattoo. They may be homeward bound with an eating disorder that could have started earlier in high school, but resurfaced or worsened in college or one that never existed until they set foot on campus.

When Donna sent her daughter several hundred miles away to Clark University, she was somewhat concerned, knowing that she might be at risk for an eating disorder because seeds for that had been planted when the girl was only 8 or 9.

“She had gained weight, which was perfectly normal for prepuberty girls — some girls just gain a lot of weight before puberty,” said Donna. “But she told me later on that she was ‘always the fat kid’ in her class. It didn’t help to have a woman who was a close family friend say things like ‘you shouldn’t be eating that.’ Her doctor also chipped in, saying she shouldn’t be eating a bagel for breakfast.

“So even as a kid she had a lot of people who were hassling her about her weight,” said Donna. Making things worse was a prescription given to her daughter by a physician for the girl’s frequent headaches. “That summer she gained 10 pounds, even though she was on a swim team,” said her mother, who found out later that the medication has a side effect: it’s an appetite stimulator.

As she grew older, “that baby fat came off,” said Donna, probably because her daughter had reached puberty, but the girl also admitted to her mother later on that she had begun to skip some meals and also began to purge after eating.

So when her daughter went off to Clark, Donna said she was concerned.

Because of the number of colleges in our area, Walden Behavioral Care decided a few years ago to open an Eating Disorders Center in Worcester, at 335 Chandler St. That was a pretty good idea, because 25 percent of the patients who find their way to the center in the old Tatnuck Bookseller building are college students, according to Laura Roias, program director.

Most prevalent on the campuses is bulimia, according to Roias, but there’s also a number of students who fall prey to anorexia and binge eating. And while many of us think that eating disorders are caused by excessive worry over body image, that’s not the case for many college students. “Only a small percentage is actually about body shape; the big portion is about managing stress,” said Roias.

Moving from home into a dorm room; going from high school where you knew everyone to a campus where everyone may be a stranger; being independent without mom and dad being there as backup; managing high level courses while trying to have a social life — all that may be too much for some students.

On top of that, without a home and dinner to come home to each night, college students have to make independent choices about food, make time for meals, choose what they want to eat in the dining hall and decide how much to scoop onto their plate if they are serving themselves.

While every individual going to the Walden eating disorders center receives an independent treatment plan, there’s a special plan that has been developed for college students, according to Roias.

The intensive outpatient program meets three days per week for three hours, the days and times individualized in order to accommodate a student’s class schedule. Students eat one meal and attend two therapeutic groups per day.

“Our college plan is tailored to address the needs of students, including how to manage the dining hall and unlimited gym access, how to cope with peers who may have untreated eating disorders and, of course, academic stress,” said Roias.

Real life experiences such as going to a restaurant or grocery store can be daunting for a person with an eating disorder, so these are incorporated into treatment.

“The goal of the program is to provide students with the tools they need to restore whole body health while in school or preparing to go to school,” said Roias.

“Often students are afraid to come into us for treatment because they are afraid they are going to be asked to leave school,” said Roias. “We really try to keep people in school.”

Some may also be enrolled in Walden’s partial hospitalization program in Worcester, where they meet from 8 a.m. to 2 p.m., five days a week.Students eat breakfast, lunch and an afternoon snack there and participate in three therapeutic groups per day.

Upon admission, students are assigned to an interdisciplinary treatment team that includes a dietician for nutritional assessment and an individual meal plan; a psychopharmacologist who completes a medical evaluation and starts a student on medication, if it is necessary, and a licensed mental health counselor, social worker or psychologist who teaches students healthy coping skills for managing stressors in their lives and regulating emotions.

“The goal of this program is to interrupt eating disorder behaviors and restore physical, emotional and psychosocial wellbeing,” said Roias.

So, now that summer has come upon us, what should parents do if an eating disorder accompanies their son or daughter home?

•Defer blame from your child
•Seek treatment and be an active part of it
•Take the time to understand eating disorders, causes, best potential treatment, keys for recovery
•Keep the conversation off food
•Take control over meal planning

You won’t be alone in reaching out for help for your son or daughter, no matter where you live.

“We wouldn’t just send them home with no support so what we would do is set up a treatment team at home with a dietician, a therapist, a physician … and if we feel they need a more intensive treatment program, like they are doing with us, then we will look up the closest program to their home and schedule them with that too,” said Roias.

And most health insurance plans cover treatment for eating disorders.