Can Babies Be Body Shamed? 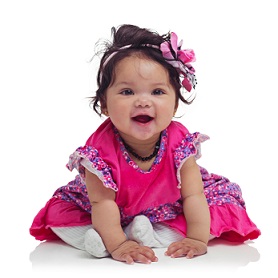 We try to protect our kids from danger and do our best to keep them shielded from things that could make them feel bad. We teach them not to speak to strangers, make sure that they put on their sunscreen and wear a helmet and we don’t talk about “adult matters” while in their presence. We do this to keep them safe, and because we know that infancy and childhood are supposed to be times filled with nurture, exploration, play and discovery that should not be infringed upon by stress, jealousy, self-degradation and dare I say it, body image issues. http://bit.ly/1IxQMSR

Why then, is our first reaction to squeeze a baby’s “chubby” legs or comment on the “chunkiness” of an infant?

This morning I logged onto my Yahoo account and was intrigued when I saw an article posted by a distraught mother of an infant titled, “Stop Fat Shaming my Baby.”

I guess I had never thought about this as a “thing” before.

The mother who authored this article was outraged that it was socially acceptable to single out her six month-old baby in public and comment on her “pudgy” body. Is it okay to remark on an infant’s appearance simply because we say it in a baby voice?

I’m just as guilty as anyone for gravitating toward babies that are a little heavier. Why? Because I believe that this makes a child cuter.

The more skin there is to pinch and snuggle, the better for me. But isn’t this just the same as gravitating toward an adult who is thinner because this is what society has taught me is attractive?

I think the reason I had never thought about the potential harm in this is because these babies don’t understand what we are saying. They won’t remember our comments about the “arm rolls” or the “big bellies.” The more I think about this, the more I worry about how this is effecting not just our babies, but the society that these babies are going to grow up in.

To use the fact that they can’t understand us as an excuse, would be the same as saying that it’s okay to call a person who speaks a different language “fat” or “chunky” simply because they can’t translate what we said literally. Perhaps that is true, but what does our body language, which is probably even more communicative than words, say? The pinching, the grabbing and the headshakes-that says more to a child than words anyway.

I remember the first time that I ever noticed my body in a way that didn’t have to do with pain from a skinned knee or tiredness from a bike ride. I was coming back from gymnastics and my brother innocently grabbed the fat in my thighs and jiggled it-intrigued by cellulite that formed. I looked down at my thighs and was suddenly overcome with anxiety. Why are my legs so much bigger than my older brother’s? Why didn’t his legs look like cottage cheese when he squeezed them? Though my brother never once said anything inherently damaging, I started being aware of my different thighs from his behavior.

Though I was young at that point, I know now that its not abnormal for a child that age (six or eight) to become preoccupied with the way that their bodies look or how much they weigh. http://bit.ly/1OSLGl1

For babies though, gosh that is a scary one, but I think it’s worth a conversation.

With a niece/nephew on the way, I am pushing myself to reevaluate the way that I act around infants and their parents/siblings. Saying things about a baby’s body-however benign we might think our comments are isn’t helping to change our culture’s values. Making the excuse that they don’t understand what we’re saying, or they won’t remember what we said is a cop out. If we instead cooed to a baby “you are so loved,” or “what a happy baby you are” http://bit.ly/1lx39FP we wouldn’t have to make these excuses to make us feel better for body shaming a baby-because really, that is what we are doing and nobody wants that hanging on their shoulders! Lets teach our infants, from that tender age, to pay more attention to what a person can offer the world, rather than how they are externally perceived by the world.

Natalie Cohen is the Senior Marketing and Community Relations Associate for Walden Behavioral Care.  She earned her Bachelor of Arts degree in Journalism from the University of Maine in Orono. Her favorite part of working at Walden is being able to act as an advocate for clients suffering with mental illnesses and interacting with other eating disorder professionals in the community.  Ms. Cohen’s passions include writing, social media and event planning. In her spare time, Natalie enjoys spending time with her dog Bella, family and friends.