Are Competitive Youth Sports Fueling the Development of Eating Disorders? 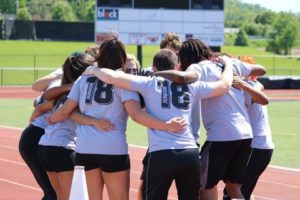 Early Sport Specialization (ESS) is a relatively new topic that is gaining momentum due to the high demands and negative consequences that are impacting the psychological and medical statuses of today’s youth. Early Sports Specialization is defined as intense, year-round training – in a single sport with the exclusion of other sports – starting as early as middle childhood. The world of youth sports is quickly changing and children are committing themselves earlier and earlier to one particular sport in the hopes of achieving elite level success. While being passionate about an extra-curricular activity that can have so many benefits is wonderful, it also has the ability to cause debilitating conditions like eating disorders that are detrimental to healthy development.

Here are some important things for parents, caretakers and coaches to keep in mind for their children and students who take an early interest in one sport.

Puberty can affect an adolescent’s relationship to their body and their sport. While healthy adolescent growth means experiencing changes to weight and shape, many teens have a difficult time adjusting to these developments – especially athletes who have specialized in a sport at an early age.  For athletes, these changes not only affect feelings around their bodies, but can also be seen as negative implications to their athletic performances. What we know about athletes, is that they often adopt the “whatever it takes” mindset which makes them more likely to engage in practices (such as dieting or over-exercising) that will increase their sport performances.

Eating disorders can be harder to detect in the athlete population. Many athletes – and their families and coaches – are unware of disordered eating practices due to a concept that is called sport specific deviance. Sport specific deviance is the idea that certain thoughts and behaviors are considered “deviant” by an individual outside of a specialized community, when within the context of those involved in the specialized community, the same behaviors or thoughts are normalized. For this reason, many individuals belonging to sport community may be unaware that they are engaging in disordered eating patterns as it not considered an abnormal practice within their sport culture. This deviance in sport can often lead to late detection, which we know decreases one’s chances at lasting recovery. Living with an eating disorder for an extended period of time can cause such extreme physical and psychological complications that returning to sport could be detrimental to an athlete’s health.

Focus on one activity can lead to burn out – and psychological distress. Burnout is another consequence that goes hand and hand with early specialization. Burnout often occurs when athletes start specialization early and miss out on things outside the realm of sport like extra – curricular activities and peer interaction (activities that are vital to healthy adolescent development). When athletes experience this burnout, it can often leave them feeling as though they have lost part of their identity when their sport does not bring them the same joy. For these young athletes, losing such a huge part of their identity can have detrimental effects on self-esteem, self – worth and overall psychological functioning. This is when we often see the development of eating disorders as a way to fill this void.

Early Sport Specialization can cause physical injury – and impact psychological status. In adolescence, early sport specialization is the cause of many overuse injuries. It can be hard enough to properly fuel an adult body engaging in such vigorous physical activity, but when you add the element of a growing adolescent body, and a still developing brain, malnutrition is a very common occurrence. Compounding all of those considerations with the very real possibility that disordered eating is likely being practiced, the implications can be devastating. Did you know that about 50% of all injuries seen in pediatric sport medicine are related to overuse? Due to the high demand of these sports and young athletes’ growing bodies, many experience bone fractures, sprains, dehydration and may even be encouraged by their pediatricians to discontinue physical activity altogether. As a result of missing practice and/or competition, young athletes often engage in extreme dieting or other eating disorder behaviors in order to keep their competitive edge during times of inactivity.

Although it is clear that early sport specialization has the ability to fuel eating disorders, it does not mean that every young athlete will develop an eating disorder. Early detection and intervention is key when working with young athletes. Starting the conversation about the importance of a well – balance, flexible diet and lifestyle is extremely important. Here at Walden Behavioral Care, we understand that this is an underserved and undereducated field with regard to eating disorders and so we are making it a priority to visit trainers, coaches and sports teams in order to spread awareness of the unique eating disorder presentations experienced within this population.

If you are interested in learning more about our work with athletes, I would encourage you to visit our GOALS website!

Corinne Coia is a former collegiate athlete and MSW intern in Walden’s GOALS program. She recently completed her master’s degree and hopes to use her personal and professional experience to stay involved with counseling athletes.