Thin-Shaming & Why It’s Just as Bad as Fat-Shaming 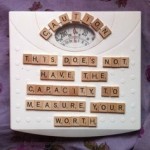 Real women are fat. And thin. And both, and neither, and otherwise.” –Hanne Blank

What’s the recipe for the perfect body?

Trick question: There isn’t one! But what I will say is that if we are going to believe that there isn’t a “perfect body,” we have got to stop preaching that “too thin” is unattractive and “too big” is ugly.

Body-shaming; it is everywhere. I recently re-watched one of my favorite shows from the early 2000s, That 70s Show and noticed a fat joke in nearly every episode. Same with Modern Family, Saturday Night Live … you name it, the show mocks those who live in larger bodies. As a society, we are used to these jokes; they almost go in one ear and right out the other. People have started to speak out about fat-shaming by encouraging people to celebrate their curves, and looking at what is inside as what matters.

But what seems to be happening is that, instead of looking at inner beauty, we are just insulting the other extreme – the girls and boys who are “too skinny.” Girls are either too heavy to wear flattering clothes, or so skinny they look like a boy. Boys are either fat and lazy or scrawny and girly. There is seemingly no “right answer.”

The (no longer) new hit song “All About That Bass” by Meghan Trainor certainly drew attention to the issue of body image. As a clinician working with teenagers, the first time I heard the song, I thought “Great! Finally an (admittedly catchy) song that celebrates curves and is targeted to a younger audience! This is going to be great, and the kids I work with will love it!”

The patients at work hated it. I could not have been more wrong, and the more I listened to it, the more I understood why. Lyrics like “Yeah it’s pretty clear, I ain’t no size two / But I can shake it, shake it like I’m supposed to do” sends the message that girls who are a size two are doing it wrong, not like they’re “supposed to.” There are plenty of girls, boys, women, and men out there who have tried to gain weight, who have sought after those coveted curves, but just cannot do it. And why? Because of a little something called genetics. Interestingly, you can’t change them. Just the same as you can’t change your eye color or height (except with some seriously extreme processes as seen in the movie Gattaca), changing your body type is a challenge, and often is literally impossible.

“I’m bringing booty back / Go ahead and tell them skinny b*tches / No, I’m just playing / I know you think you’re fat, But I’m here to tell you that, Every inch of you is perfect from the bottom to the top” Wait … a minute ago, she was implying that you aren’t perfect unless you have something to shake – that you only have a good body if you have curves? Seems like a confusing message. And not all “skinny” people think they’re fat; as my patients have pointed out, this line has hints of mocking body image distortion and eating disorders.

Sure, the song does offer a new perspective to celebrating curves, and for that reason, I respect the effort. But is an eye-for-an-eye approach really going to help? Why, in order to feel better about having curves, does someone have to insult those who are naturally thin? Why, in order to feel more satisfied with a very thin frame, do we have to put down those with more curves?

There is no right body. There is no wrong body. “Real women have curves?” How about some women have curves, some women don’t. Everyone is a real person, regardless of their size, shape, ability, etc. Telling a thin person to “eat a sandwich” isn’t any better than telling an overweight person to “skip dessert.” How about instead of a rivalry between skinny and fat, we just ditch the shaming lingo and celebrate the fact that people are different? Do we really want to live in a world where everyone looks the same? As one of the adolescent patients put it, instead of thin-shaming or fat-shaming, “I prefer no-shaming.”

What do readers think? This song, and others like it, have received mixed reviews and can be analyzed in many ways. Please share your point of view in the comments!