Health care providers, community leaders and others are hailing the opening of the Walden Eating Disorders Center at Rockville Hospital as the first inpatient unit for treating eating disorders in Connecticut.

The 30-bed, 15,000 square-foot unit, which was developed by Eastern Connecticut Health Network and is being managed by Walden Behavioral Care, is expected to draw patients not only from throughout Connecticut, but from New York, New Jersey and other states. 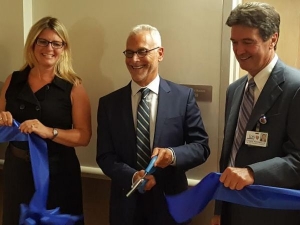 “We recognized the need for inpatient treatment for eating disorders in Connecticut, which will enable our residents and those of neighboring states to be treated closer to home,” ECHN President and CEO Peter Karl said. “This partnership will help so many members of our community to get the level of treatment that they need.”

Walden CEO and President Stuart Koman said the new inpatient unit, which will treat adolescents 12 and older as well as adults, is “the anchor” and “the nucleus” of Walden’s system of care in Connecticut, which also includes outpatient clinics in South Windsor and Guilford. Residential treatment is also being planned in Manchester.

Walden’s partnership with ECHN began with the opening of the South Windsor clinic in 2012.

“Eating disorders impact thousands of residents in Connecticut alone, with the highest mortality rate of any psychiatric disorder,” Koman said. “We’re honored to partner with the amazing team at ECHN to deliver first-class service and specialized care, opening the doors to boundless possibilities of hope for residents across the region.”

About 122,000 Connecticut residents, 3.4 percent of the population, suffer from eating disorders, which have the highest mortality rate of any psychiatric disorder, according to the National Association of Anorexia Nervosa and Associated Disorders.

Walden treats patients who have anorexia, bulimia, binge-eating disorder or OSFED (Other Specified Feeding and Eating Disorders). Walden’s approach to treatment is to “follow the patient through all levels of care,” Koman said, “so they do not need to figure out where to go next. They know the program leads to recovery.”

Inpatient treatment is for patients in the advanced stage of an eating disorder. It provides medical stabilization as the first stage toward recovery. Depending on individual needs, patients may require residential care, partial hospitalization or intensive outpatient care as they advance toward recovery.

“Most of the time,” Koman said, “when you get good care and you have your family behind you, recovery does happen.